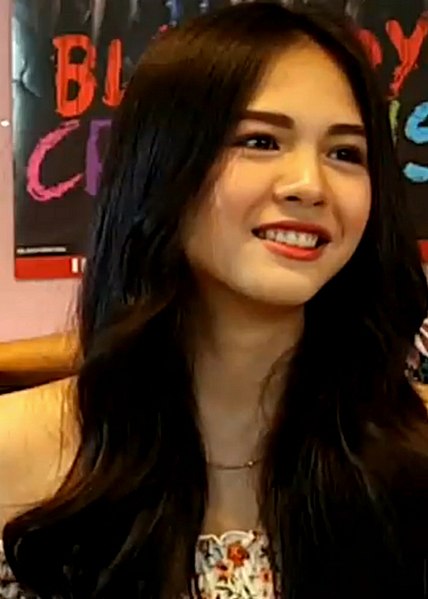 Salvador won Philippines Most Promising Female Star at GMMSF, a FAMAS Award and three PMPC Awards. She had three singles in OPM Top 10 and garnered a platinum record album. Internationally, she has sang for Disney's Moana and Hong Kong Disneyland.

Salvador is the daughter of former West End musical actress Miss Saigon's Jenine Desiderio and Juan Miguel Salvador, the lead singer of 80s group, Rage Band. He is known for songs such as O Kay Sarap Ng Pag-ibig and as a songwriter, having credits that include Awit Award Best Folk-Pop Recording, Sumasarap Ang Gising by True Faith. She belongs to the famous Salvador showbiz clan, being the great grand niece of basketball player Lou Salvador. Her parents separated in 2002. She attended schooling at St. Paul College, Pasig.

Like her parents, she has interest in performing arts and started singing at a young age.

Salvador was first scouted after guesting on Eat Bulaga's Sa Pula, Sa Puti. Management directors Manny Valera and Johnny Manahan signed her a contract as their talent, semi-managed by Star Magic. She since appeared in a few stage plays, and represented the country in a world trade fair in Seoul, Korea in 2008.

Salvador made her breakthrough debut role at age fourteen in the teleserye Be Careful With My Heart (2012–2014) starring Jodi Sta. Maria and Richard Yap. Her character, middle daughter Nikki Grace Lim became known for her Taglish catchphrases. One of the most successful dramas of ABS-CBN, it later aired in regions of Africa, Asia, the Middle East, and South America with albums and concerts tours worldwide. Salvador appeared in Palmolive and Olay advertisements, and also garnered awards such as 27th PMPC Star Awards for Television for Best New Female Personality and the FAMAS Award for German Moreno Youth Achievement Award.

On March 8, 2013, she was launched as a part of Star Magic Circle 2013.[21] In July 2014, the actress signed a multi-picture deal contract with Regal Entertainment and Star Cinema.[22][23] The last episode of Be Careful With My Heart aired November 28, 2014.[24] The same month, Salvador was nominated Best Appearance in a Music Video after playing the love interest in Enchong Dee's Chinito Problems which was released November 7, 2014 on Myx.[25][26]

While appearing on talk shows in 2014, Salvador gained attention for her vocal talent– said to be a mix of "steely pop" and "indie-rock".[27] She participated in her first music project through the nationwide songwriting competition, 2014 Himig Handog P-Pop Love Songs.[28] She won 3rd Best Song with her single "Mahal Kita Pero" (I Love You But I).[29]

By January 2015, Janella was cast in her first main lead role in ABS-CBN's Oh My G! as Sophie, an orphan teenager who blames God for the loss of her loved ones, until G ("God", various actors) appears to her in different forms to enlighten the latter on the obstacles she is facing.[30]

On July 1, 2015, Star Music announced Salvador as their recording artist.[31][32][33] She released her eponymous debut album Janella Salvador the same month.[34] It contained nine tracks including renditions of Sharon Cuneta's "Dear Heart" and Donna Cruz' "I Can", "Kapag Tumibok ang Puso".[35] Her version of "I Can" is used as the theme song for her television show, Oh My G! The album peaked at number one for three weeks.[36][37][38] After selling over 15,000 physical copies, it reached platinum status by Philippine Association of the Record Industry.[39] For Janella Salvador, she won Best New Female Recording Artist at the 2016 PMPC Star Awards for Music.[40] Salvador recorded the theme song "Happily Ever After" for Hong Kong Disneyland, released in October 2015.[41]

She starred in her film debut Haunted Mansion (2015)[42] which was chosen to be a part of the Metro Manila Film Festival, and became a top grosser in the festival's box office.[43][44] For her performance in the film, Salvador won the 32nd PMPC Star Awards for Movies – New Movie Actress of the Year.[45]

Salvador and co-star Marlo Mortel were chosen as interpreters of Francis Louis Salazar's "Mananatili," one of the finalists for 2016 Himig Handog P-Pop Love Songs on April 24, 2016.[46]

Salvador was cast alongside Elmo Magalona in the 2016 musical drama Born For You.[47] The story is based on two singers who are destined to fall in love through the Japanese red string of fate.[48] For the album soundtrack, she featured her versions of Yeng Constantino's Ikaw and Pangarap Lang in Japanese, 夢ダカダ (Yume daka da) and アナタ (Anata). The album topped iTunes Philippines.[49][50]

Following her Disney in Concert performance at Kia Theatre, Cubao Salvador was picked to sing the theme song of Moana for the Philippine release on November 20, 2016.[51][52][53] A multi-language mash-up including Salvador was released by Walt Disney Studios, featuring singers from Southeast Asia.[54] Her version of "How Far I'll Go" currently holds 30 million views, the highest viewership amongst all the Asian remakes on YouTube.[55] Disney's Vevo channel monetized the video in December 2016.[56]

On December 14, 2016, Salvador reunited with Richard Yap in Mano Po 7: Tsinoy, the seventh installment in the Mano Po series.[57] She featured in co-star Elmo Magalona's album Elmo for the track, "Alam Mo Ba".[58] The song garnered three nominations at the Myx Music Awards 2017.[59][60]

On January 1, 2017, Salvador was chosen as the muse for BoyBandPH's single "Unli" (the boy band's first release after winning Pinoy Boyband Superstar), where she appeared in their music video.[61] In May 2017, she held her first concert, Super Janella.[62] On September 12, 2017, Salvador renewed her Regal Entertainment contract with a four-picture deal under their studio.[63] The same month, she participated as a finalist for the 2017 Himig Handog P-Pop Love Songs. Her interpretation of the Karlo Zabala-penned song "Wow Na Feelings" won 4th Best Song and TFC's Global Choice Award.[64]

She is also set to lead alongside Jameson Blake in So Connected, a film directed by Gawad Urian-winning director Jason Paul Laxamana.[68]

On March 14, 2017, Metrobank announced it was investigating the alleged phishing scandal of Salvador wherein she lost ₱100,000 from her bank account.[69][70] The perpetrator, an overseas hacker, was involved in multiple female victims stolen information from February to March 2017.[71] BSP later released a national statement on the public's inquiries over cybersecurity.[72]

Login or Register to enable comments
PinoyAlbums Group 2014-2020 | 103-0.326
wpDiscuzComment Author Info
You are going to send email to
Move Comment