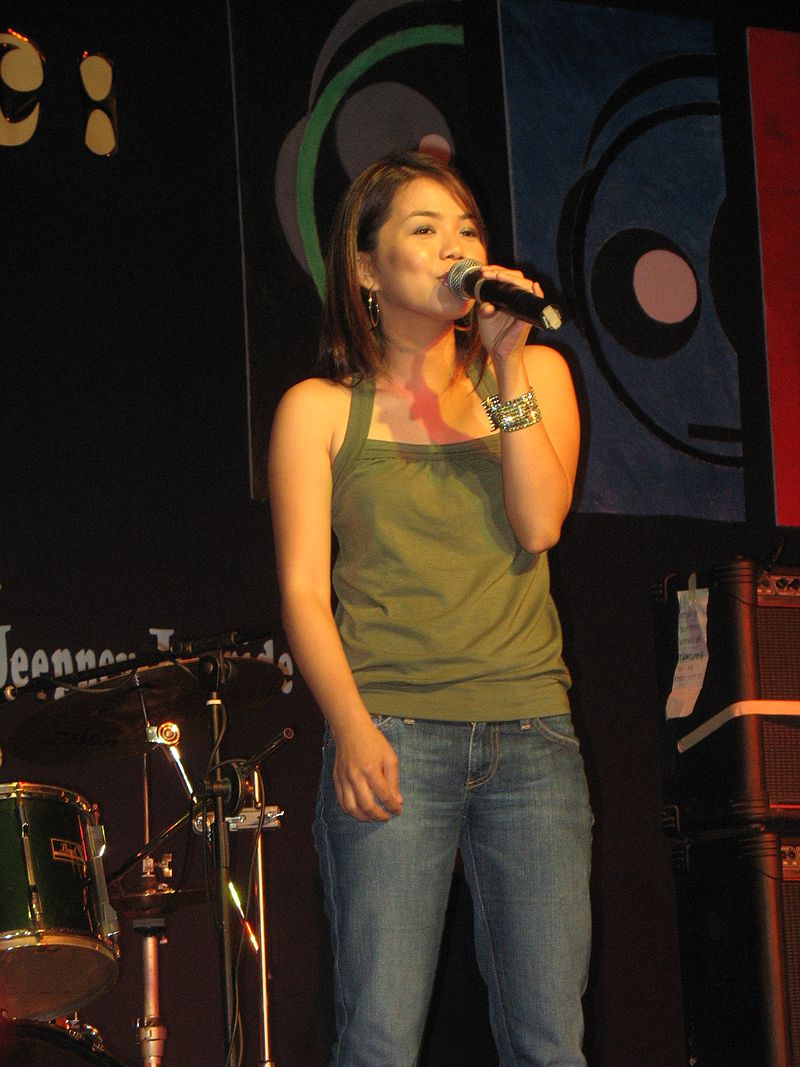 In late 2009, she left MYMP due to "irreconcilable differences" and signed with Star Music as a solo artist. Her solo debut album Now Playing was released in February 2010.

Fernandez was born on March 18, 1978 in Davao City, Philippines. She is the daughter of an engineer father, and an obstetrician-gynecologist mother. Her older sister is also an obstetrician-gynecologist. She went to high school at the Ateneo de Davao University. She studied college at Miriam College in Manila, finishing Bachelor of Science in Psychology. She is presently taking up a Master's degree at the Ateneo de Manila University. In late 2011, she married Gavin Lim.

Fernandez started her recording career as the lead vocalist of the acoustic group MYMP in 2003. She was signed on Ivory Records together with her bandmates Chin Alcantara and Mike Manahan. It was the trio of Alcantara, Fernandez and percussionist Mike Manahan that established the beachhead for M.Y.M.P.’s frontal assault on the sales and radio charts.

Their recording career started when Raymond Ryan, the station manager of iFM, watched their gig. Ryan met with a producer to produce their debut album, Soulful Acoustic. Ivory Records then became their recording company. M.Y.M.P.'s debut album was released on Ivory Music and Video's 20th anniversary. The band became famous with their original hit song "A Little Bit" (which won the People's Choice "Favorite Song" Award in Awit Awards 2004) and cover versions of Sting's "Every Little Thing" and Bob Marley's "Waiting in Vain".

The trio did click but M.Y.M.P. became a duo when one of their members decided to leave the group. Manahan left the band in 2003 due to what was called "professional differences".

Alcantara and Fernandez continued as a duo and emerged together with Andrew and John as bassist and kahonista, respectively, as two more albums were released in a year. Beyond Acoustic and Versions, both 12-track albums, were declared certified Gold after less than a month.Their original hit song "Get Me", and covers "Tell Me Where It Hurts", "Kailan", "Especially for You" and "Eternal Flame", were later used as theme songs for TV series and commercial ads.

In early 2009, MYMP were regularly seen every Sunday on ABS-CBN's variety show ASAP's "Sessionistas" segment together with Nina, Aiza Seguerra, Sitti, Richard Poon and Duncan Ramos. In November 2009, it was announced that she was no longer with MYMP due to "irreconcilable differences". It was also stated that she had signed a recording contract with Star Records. Upon leaving MYMP, Fernandez signed with Star Records. Now Playing serves as her launching album to Star Records which includes two of her original compositions. One of them is produced and musically composed by Aiza Seguerra called "Di Lang Ikaw" that is used as the love theme song of TV series Rubi. The carrier single is "I Don’t Want To Fall". The album consists of pop songs but mainly of ballads. The sound of the album is also a departure from her previous all-acoustic style. In November 2010, Juris released If You and Me mini album in South Korea in CD format and digital download. It consists 6 tracks including 2 English cover of Korean songs: "If" by Taeyeon of Girls' Generation and "Don't Forget" by Baek Ji-young. Also includes her cover of Tamia's "Officially Missing You" and "Opposites Attracts" composed by Junjee Marcelo which is also included in her first studio album Now Playing. The songs in the album were all recorded in the Philippines. Meanwhile, Juris is the first Filipino mainstream artist to release an album in South Korea. But before the release of her mini-album in Korea, it would be recalled that her song "Say You Love Me" taken from her former MYMP's album Versions that topped the Korean charts, Cyworld and BGM Charts for three months. In promotion of the album she appeared at the Green Plugged Seoul 2011 Music Festival on May 14, 2011 at the Nanji Hangang Park. Green Plugged Seoul 2011 is a two-day, multi-stage international festival that offers a variety of art performances including concerts, exhibits, plays, dance and other multi-media event with 117 participating artists from all over the world, including Korea, Finland, the United States, the United Kingdom, Japan, Sweden and the Philippines. In February 2011, with the success of ABS-CBN's variety show ASAP's "Sessionistas" segment, they held a concert entitled ASAP SESSIONISTAS 20.11 at the Araneta Coliseum. In the following month, Juris held her first solo concert entitled "Juris Celebrates" at SM City Davao Cinema 3 in Davao and at the Music Museum respectively. The show is a celebration of Juris’ birthday as well as her first anniversary as a solo artist. On the year, Juris released her second studio album Forevermore. It consists of 13 tracks including an original composition of Juris called "Bliss" and four OPM cover songs including Side A original song "Forevermore". The album was placed number 2 upon release at nationwide sales in Odyssey Music and Videos chart and Astrovision/Astroplus report in the Philippines. It became number 1 after two months. The album won at the 24th Philippine Awit Awards for Album of the Year. In March 2012, Juris held a birthday concert entitled Forevermore: A Birthday Concert with guess Ebe Dancel at the Music Museum. In September, Juris released an international studio album Dreaming Of You in Singapore by S2S Pte. Ltd. It contains only 12 English tracks and topped the jazz chart of Singapore’s popular music store HMV. Also, made it to the list of top albums in iTunes Thailand and was one of the featured albums in iTunes Asia. In November, Juris released her first all-OPM Christmas album entitled Paskong Puno Ng Kasiyahan. The album features five original tracks, including the carrier single "Paskong Puno Ng Kasiyahan" which was composed by herself. The album also has one cover song, "Sana Ngayong Pasko", written and arranged by Jimmy Borja. In 2013, Juris participated at Himig Handog, multimedia songwriting and music video competition in the Philippines by interpreting the song "Hanggang Wakas" composed by Soc Villanueva. It eventually finished in second place behind "Anong Nangyari Sa Ating Dalawa" composed by Jovinor Tan and interpreted by Aiza Seguerra. In August, with the success of her first international album, Dreaming Of You in Singapore, Juris also released Dreaming Of You (PH Deluxe Edition) in the Philippines, it contains 19 tracks that features additional OPM songs including "Hanggang Wakas", mostly TV and movie theme songs sung by Juris. In 2014, Juris released a song for the original soundtrack of the Philippine television series Ikaw Lamang and Dyesebel called "Sa Aking Pag-Iisa" and "Puwang Sa Puso" respectively. Later, Juris together with Erik Santos and Richard Poon were special guests to "I Heart You 2", Be Careful With My Heart anniversary thanksgiving concert. In August, Juris participated again at Himig Handog by interpreting the song "Hindi Wala" composed by Nica del Rosario. The song won as the Fifth Best Song in the Himig Handog 2014.

Login or Register to enable comments
PinoyAlbums Group 2014-2020 | 103-0.253
wpDiscuzComment Author Info
You are going to send email to
Move Comment