Alden Richards – Wish I May

Alden Richards – Wish I May – Single 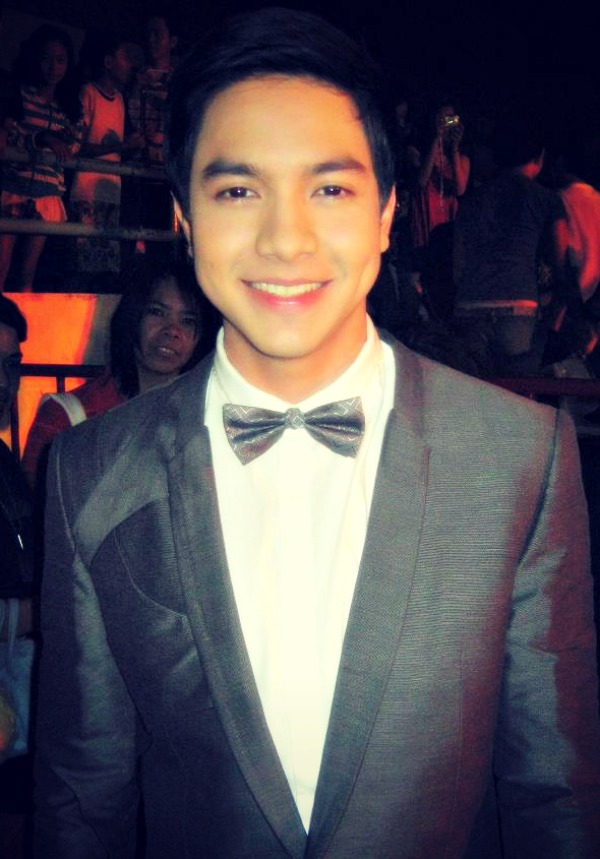 Richard Reyes Faulkerson, Jr., also known by the stage name Alden Richards, is a Filipino television actor, host, model and recording artist signed with GMA Network. He is best known for his roles in Alakdana, Tween Hearts, One True Love, Carmela, The Road, and the live "Kalyeserye" segment of Eat Bulaga!. Richards released two albums, Alden Richards in 2013 and Wish I May in 2015. In 2015, Richards won his first Best Actor award for his portrayal in Ilustrado.

Alden Richards was born as Richard Reyes Faulkerson Jr. on January 2, 1992 in Santa Rosa City, Laguna, Philippines. He is the second child of Richard Peralta Faulkerson Sr. (born July 3, 1966, Ermita, Manila) and Rosario Reyes, a native of General Santos. He was a Paconian and studied at Paco Catholic School in Paco, Manila during high school before he became an actor. Growing up, Richards wanted to be a pilot but his mother urged him to pursue acting instead, although he was hesitant to do it initially. After his mother died, to support his family financially and to fulfill his mother's wish for him to be an actor, Richards decided to try his luck in show business by joining various male pageants in Laguna and worked as a part-time commercial model. He holds the titles Ginoong Sta Rosa 2009 and Ginoong Laguna 2010. He also auditioned for StarStruck and Pinoy Big Brother: Teen Clash of 2010 under his real name, but failed to be a part of both reality shows. He also appeared on a television commercial for a multivitamins product. He took up Business Administration degree at De La Salle Canlubang in Biñan City, Laguna but didn’t finish because of work.

After passing the auditions, he changed his stage name to Alden Richards and was launched as an actor for GMA Network on the afternoon soap, Alakdana playing the role of Joma, a disabled man. He was paired with also then up-and-coming actress Louise delos Reyes. He also signed a 5-year contract with the network. In 2011, he became a part of the successful teenage series, Tween Hearts and also starred in its film adaptation Tween Hearts: Class of 2012. He also performed on GMA Network's Sunday variety shows Party Pilipinas and Sunday All Stars. He graced two episodes of Spooky Nights in Singil and in the Christmas episode of Spooky Nights as Elmer. Richards was praised by critics with his performance as a psychopath in the movie The Road. By the end of 2011, he played Gobi in the box office hit movie Ang Panday 2 which is an entry at the2011 Metro Manila Film Festival. Richards was also praised by some entertainment writers for his friendliness and his remarkable performances, predicting that he will be the next big star of GMA Network.

Richards was awarded as the 1st Filipino Amazing Male Newcomer in the first Yahoo! OMG! Philippines Awards in 2011. He also won as Best New Actor in the Golden Screen Awards in the same year. He is never hesitant to share his love life with the media, the fact that he invited FHM Sexiest of 2011 Sam Pinto for a date on national TV. The latter did accept the invite and went on a cruise date with Richards in the Manila Bay, but the actress revealed that it was just a friendly date. On Valentine's Day of 2012, a GMA Network promo A Date with Alden Richards was held on national television and the micro-blogging site Twitter where it trended.

In 2012, Richards played the supporting role of a thief named Rico on the primetime series, My Beloved headlined by Marian Rivera and Dingdong Dantes. He also acted on the episode UNOS (Calamity) of the fourth season of a Holy Week special, Tanikala, presented by Christian Broadcasting Network. Richards starred in his first lead role on a primetime TV series with One True Love which premiered on June 11, 2012. It is about the enduring power of love between two people from two different walks of life. In this series, he was once again paired with his love team Louise delos Reyes. The success of the series resulted in a five-week extension, approved by the network on August 20, 2012. According to GMA Network on their press release, the extension was due to its phenomenal ratings success over its rival program since it premiered. Richards who played "Tisoy" is a poor guy who is in love with a rich girl. Viewers and critics praised Richards with his performance in the TV drama. According to him, the series was his biggest break in the industry. Richard's earned his first Best Actor nomination for One True Love in the 2013 Golden Screen TV Awards. While One True Loveproved Richards' acting skills, it took a while before he had a new TV or movie project until he was cast as young Simeon (the character played by Sen. Bong Revilla) in the historical drama Indio, one of the biggest projects of GMA Network for 2013. According to Richards, "I am proud to have played the role of the young Bong Revilla. It didn't sink in that i did not have show for a long time, but when I counted the days, I realized I have not acted in six months in a regular show...".

The story of Richards' life was featured on drama anthology, Magpakailanman aired in March 2013 and re-aired on September 12, 2015 wherein he portrayed himself. In the same year, Richards and Delos Reyes joined together once again in the GMA Network melodrama series entitled Mundo Mo'y Akin with actresses Sunshine Dizon and Angelika dela Cruz. It is a family drama that follows a compelling storyline exploring the insatiable quest for beauty and wealth. The characters find themselves ensnared in a game of deceit and betrayal, and will stop at nothing to gain power and prestige. Richards' portrayal on the show earned him another nomination at the 5th Golden Screen TV Awards.

Richards debuted as a singer through the #SummerCrush episode of the Sunday noon time show, Party Pilipinas. He launched his first single, "Haplos", a revival ofShamrock's hit song which surfaced in My Music Store and iTunes on April 5, 2013. The self-titled debut album, Alden Richards, under Universal Records, was released on May 26, 2013. The track "Haplos" was used as soundtracks on his primetime show Mundo Mo'y Akin. Meanwhile, "Di Na Mababawi" and "Sa Aking Tabi" were used as theme songs for the Filipino-dubbed version koreanovela My Daughter, Seoyoung and morning drama With a Smile respectively. He was featured as Myx Celebrity VJ for the month of June 2013. Richards was nominated in the "Best Performance by a New Recording Artist" category in the 27th Awit Awards. On the 6th Star Awards for Music, Richards was nominated for "New Male Recording Artist for the Year" while his self-titled album was nominated for "Album Cover Design and Concept of the Year".

In 2014, Richards was paired with GMA Network's primetime queen Marian Rivera in the TV series Carmela. His song "Naaalala Ka" from his self-titled album, served as the ending theme for Carmela. He also starred in a short film entitled Kinabukasan with the Philippines' superstar Nora Aunor. Close to the end of 2014, he had another TV series produced by GMA News and Public Affairs entitled Ilustrado. He played the coveted role of Filipino national hero, José Rizal. This role gave Richards his first Best actor award from the 29th PMPC Star Awards for Television. He was the only nominee from his home network against a field of respected actors from the rival TV network.

In 2015, Richards became a part of the Philippines' longest running noontime variety show, Eat Bulaga!. He is currently appearing as a co-host in the segment That's My Bae. His popularity has further skyrocketed not only because of the daily TV exposure as a mainstay co-host, but also because of the formation of an accidental love team between him and his Eat Bulaga! co-host Maine "Yaya Dub" Mendoza.

The love team, labeled by fans as AlDub, has been a consistent Twitter trending topic in the Philippines and worldwide. Because of their huge popularity, Eat Bulaga! created a mini-series for AlDub labeled by Joey de Leon as "Kalyeserye" within the segment "Juan For All, All for Juan". On August 6, 2015, Richards inked a four-year movie contract withAPT Entertainment, the film outfit of Eat Bulaga! producer TAPE Inc. Richards and Mendoza are set to appear in the 41st Metro Manila Film Festival entry My Bebe Love. The Movie is headlined by Vic Sotto and Ai-Ai delas Alas and was directed by Jose Javier Reyes. "My Bebe Love" set an all-time high first day gross sales and is one of the top grossing films for MMFF 2015. It was also awarded as the festival's Third Best Picture.

In July 2015, Richards got reunited with former leading lady Louise delos Reyes in the "Talent" episode of Karelasyon.

On August 13, 2015, Richards signed a recording contract with GMA Records. Richards' second album, Wish I May, was launched on October 17, 2015 in SM City North EDSACinema 11. The album contains at two original songs and renditions. The first single, "Wish I May," is an original composition by Agat Obar-Morallo and was released earlier for online downloading and streaming in September 2015. The music video of "Wish I May" premiered on October 18, 2015 on GMA Network's Sunday noontime show Sunday PinaSaya, where Richards is also a co-host. The single landed on the top spot of iTunes Philippines song charts. The sophomore album earned a gold record award fromPARI prior to being officially launched.

In September 2015, Richards' self-titled debut album earned a gold record award recognition from PARI and ranked number 10 on Billboard's World Albums Charts (Billboard). In October 2015, Universal Records released a special edition of the debut album which included AlDub theme song "God Gave Me You" by Bryan White. The track "Naaalala Ka"was released as an single on Itunes and other online music stores. In October 2015, the album received a platinum record award from PARI for selling more than 15,000 copies. In December 2015, the album turned double platinum.

Richards performed GMA Network's Christmas station ID theme for 2015. Aside from singing the theme song, Richards also appeared on the station ID with Maine Mendoza and the "Kalyeserye"'s lolas.

Alden won as Best Actor in a Drama Series for Ilustrado which he played Philippine National Hero Jose Rizal in the recent 29th PMPC Star Awards For TV, and also won with Maine Mendoza as German Moreno Power Tandem Award in 2015. Richards received a star at the Philippine Walk of Fame on December 1, 2015 at Eastwood City, Libis, Quezon City along with his "Kalyeserye" co-stars.

In March 2016, Richards and Mendoza starred in God Gave Me You, a Lenten season drama special of Eat Bulaga!.